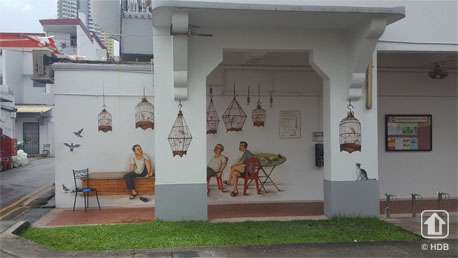 Murals to Sightsee in Tiong Bahru

Tiong Bahru is known for many different things, from food to shopping and to arts. If graffiti is your favorite type of art or if you love enjoying looking at art as well as aesthetic photos for your social media, you should definitely check out murals at Tiong Bahru. By being able to check out one or all of these murals, you will be amazed at how artists are able to create paintings on a standing wall in such a good and high quality. You will also be able to keep memories of these murals in your phone that you can look back at any time. So, it is very much recommended that you check these murals out in Tiong Bahru.

Being one of the most popular murals in both Singapore and Tiong Bahru itself, this piece of art has been talked about many times by both visitors and locals. This mural has 6 birds in a cage whilst being looked at by 4 uncles in a Kopitiam shop. Located at the heart of Tiong Bahru, many visitors come to Tiong Bahru to come to look at the famous ‘Bird Singing Corner’. It represents the old times where uncles would hang out and spend their time drinking kopi. Alongside, the birds reflected of the times that it would be flying in and out or the store manager would have birds in the cage to bring color and attraction.

Behind the scenes of this painting was inspired by the artist’s memory of their first home in Sago Lane, Chinatown. In addition to that, the artist noticed that many visitors tend to “peep” into the homes at Tiong Bahru. So they thought that by painting a typical home furnished in the traditional way, the mural can actually act as an alternate “showroom”. ‘Home’ allowed the artists to reminisce about their childhood times when they got their first sofa at their house and were able to slouch for the first time. The original idea of this mural in the drawing of the TV was from having a painting of Wangsa Yefung, a popular comedian duo in the 70s on the TV. However, they decided to change because the sentimental historic moment didn’t quite fit the room’s lepak setting! Instead, I painted Mr. Lee’s image on the newspaper, of him promoting the Speak Mandarin Campaign in 1979. It was interesting and smart for the artists to change that!

In the beginning, the artists wanted to create two different murals, however, they decided to combine them into one. Also, at first, the “Pasar” (Malay for market) was originally not chosen because of its high costs but they liked the concept. So in the end, they simplified the design, combined with the “Fortune Teller” and lowered the costs. Otherwise, the ‘Fortune Teller’ would be painted somewhere and be painted by itself, but near the ‘Pasar’ painting. When the mural was completed, the artists tried to use social media to find the original fortune teller, whom they had painted based on a small black and white photograph. They thought it would be touching for the fortune teller to view the mural of themselves, however, unfortunately, in just less than a week of the hunt, the man had passed on some years ago.

4. Giant Goldfish that Swims on the Wall

Created by local artists, the artists themselves wanted to create a unique piece in the heart of Tiong Bahru. With many murals there painted with the message of the olden days of Singapore, the artists wanted to share their piece with a painting of giant goldfish that is swimming on a wall. The perspective of the goldfish seems like it is coming towards you, allowing the visitors to have a sense of reality when a fish is actually coming to you. In addition, the background color of the mural somewhat blends in with the white wallpaper which made it seem that the fish came directly from the wallpaper, not from the mural, which was interesting to look at. The minimalistic of color brought simplicity to art as creating a mural, costs a lot of money, and having such simple art with minimal use of color but with a whole lot of clear and meaningful pictures will catch a lot of attention from the visitors.

The family of goats is located near the famous Tiong Bahru market. As Tiong Bahru brings the family together, the artists thought to themselves of why not bring a family of goats to the area of Tiong Bahru to represent that. The family of three goats was painted in the area of Tiong Bahru. The parents have colored a mix of black, white, and grey while their child was colored a mix of light and dark brown as well white. The adorableness of the family attracts the eyes and hearts of visitors, especially animal or even goat lovers. If you love goats and/or animals, this is the mural for you, so come visit and take many pictures of it!

The artist himself, Alex Face is an internationally recognized Thai graffiti artist who rose to prominence in 2009, with his signature character named after his daughter — a three-eyed child dressed in a ragged rabbit suit, who sometimes closes her eyes and displays a weary, vulnerable look. With the uniqueness of a character as well as the painting, it has caught much attention from Thailand and across the world, therefore Singapore allowed Alex to come and paint a few of his signature characters in the buildings at Neil Rd. This has given Singaporeans and visitors the chance to experience and look at Alex’s masterpieces. With this mural, visitors and Singaporeans can take photos of it as well as take photos next to the picture! This will give a memorable experience that you can look back to in the future!