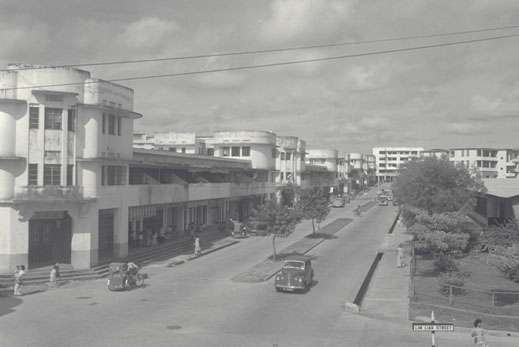 Once nothing more than a network of slums and squatter colonies, Tiong Bahru today has flourished into a historically significant estate, combining its rich heritage and push for modernisation into a truly unique aesthetic. But as with so many things, there’s often more to it than meets the eye—and the tale of Tiong Bahru’s evolution from a lowland swamp to a vibrant, bustling town is certainly one worth hearing.

Past Of Tiong Bahru

Origins of the name

Given Singapore’s status as a cultural melting pot, it comes as no surprise that the name “Tiong Bahru”, like many other local phrases and slang terms, is multilingual in origin. The Hokkien word “” (meaning “to die”) and the Malay word “” (meaning “new”) together originally meant “new cemetery”. An older cemetery located at the present-day site of the Singapore General Hospital, known as Teong Lama (“old cemetery”), was built in 1828 to be used as a graveyard for the Hokkien community in the area. However, in 1859, the burial grounds were shifted to Tiong Bahru, giving the area its name.

In 1882, the Singapore General Hospital was relocated to its present site, and settlers began moving into the lowlands surrounding it. In the early 1900s, apart from serving as a burial ground, Tiong Bahru was mainly used for cultivating farmland. However, the area was swampy and infested with mosquitoes, and this, coupled with overcrowding and poor sanitation in Kampong Tiong Bahru by the 1920s, became a health problem as the hospital was located nearby.

It was then in 1925 that the Singapore Improvement Trust (SIT), precursor to the modern Housing Development Board (HDB), spearheaded an improvement scheme initiated by the colonial government. Formed in 1927, the SIT aimed to solve the problem of overcrowding by building new homes for the settlers already living in the area, and tackle sanitation by building a new drainage system. Land acquisition for these housing projects began in 1928, followed by the levelling of hills and filling of swampy grounds with sand. Infrastructure, including roads, drains and culverts, was also added. Meanwhile, the graves in both Teong Lama and Tiong Bahru were exhumed by 1930 and moved to Bukit Brown Cemetery.

Work on 72 acres of land was completed by 1931, but attempts by the SIT to sell it to private developers failed due to a negative economic outlook. It was only in 1936 that the SIT elected to develop Tiong Bahru Estate by itself. In December 1936, the first block of SIT flats (numbered Block 55) were completed. Today, it stands at the intersection of Tiong Bahru Road and Tiong Poh Road. Construction continued even up until the outbreak of World War II, and by 1941, 784 flats had been built to house a population of 6,000.

Did you know? Tiong Bahru was Singapore’s first public housing estate to be developed by the SIT.

After the war, the situation became urgent as much of the existing infrastructure had been damaged and needed repairing, and a squatter colony (numbering about 100,000 to 150,000) had in the meantime settled in the slums dotting the estate. To handle the housing shortage caused by World War II, the SIT commenced construction on a second wave of public housing from 1948 to 1954, consisting of 1,258 new SIT flats.

The new flats, adhering to an “open development” concept and featuring large, open spaces and footpaths, were highly popular among residents, with about 17,000 people inhabiting them by the end of the 1950s. However, it wasn’t all smooth-sailing: in 1959, a major fire caused S$2 million worth of damage and the loss of homes for 12,000 people.

Also in 1959, the newly-elected People’s Action Party (PAP) replaced the SIT with the modern-day HDB, and tasked it with building 900 new low-cost flats in Tiong Bahru by 1961 as part of its five-year plan. The plan had to be sped up as a result of the infamous Bukit Ho Swee fire on 25 May 1961, which ravaged 40.5 hectares of land and left 16,000 people homeless. To date, it remains one of Singapore’s worst and most destructive fires in history.

To enable current tenants to become homeowners, the Ministry for National Development (MND) announced in 1965 that all 823 pre-war flats in Tiong Bahru Estate would be sold. In 1972, this scheme was extended to tenants of post-war flats.

Did you know? The iconic spiral staircases found in many post-war flats are inspired by local shophouses and meant to combat Singapore’s climate, where intense heat and rainstorms are common. The post-war flats are reminiscent of the International Style school of and hence have a more functional, utilitarian look.

Throughout the 1970s and 1980s, Tiong Bahru continued to thrive along with the rest of Singapore as it ventured beyond the vestiges of independence. In the early 1980s, the owner of the Wah Heng coffee shop installed a metal structure outside its premises to give bird owners a place to hang their birdcages, while chatting over a cup of coffee. The area became known as “Bird Corner”, and was well-known for its symphony of songbirds that accompanied their owners to the coffee shop.

It was only in the 1990s, however, that Tiong Bahru began its transformation into the cosmopolitan, dynamic district it is today. The addition of an MRT station, new private condominiums and a shopping mall attracted an influx of new, younger residents who wanted to make their home in the area. Further redevelopment occurred in 1995 when 16 blocks of post-war flats opposite Tiong Bahru Plaza were selected to undergo the first Selective En-bloc Redevelopment Scheme (SERS).

In 2003, the Urban Redevelopment Authority (URA) granted conservation status to 20 blocks of pre-war SIT flats, a clear sign of both their historical significance and the rich heritage of the Tiong Bahru area as a whole. But the changes have not stopped there: in 2006, the former Seng Poh Road Market reopened its doors as the now-familiar Tiong Bahru Market and Food Centre, which sits at the nexus of Seng Poh Road and Lim Liak Street.

Today, Tiong Bahru is a veritable patchwork of traditional buildings and modern infrastructure, dotted with contemporary new cafes that are tucked under tall mature flats. While some may call it gentrification, there are also others who see it for what it is: a truly unique blend of old and new, coexisting peacefully to create an estate like no other.

Certainly, no one can predict what lies ahead for Tiong Bahru. But in the meantime, we can watch as this work-in-progress becomes something more, as the familiar makes way for the unknown. And at the end of the day, maybe that’s the best way to describe this quietly charming estate: at the crossroads of something old and something new.