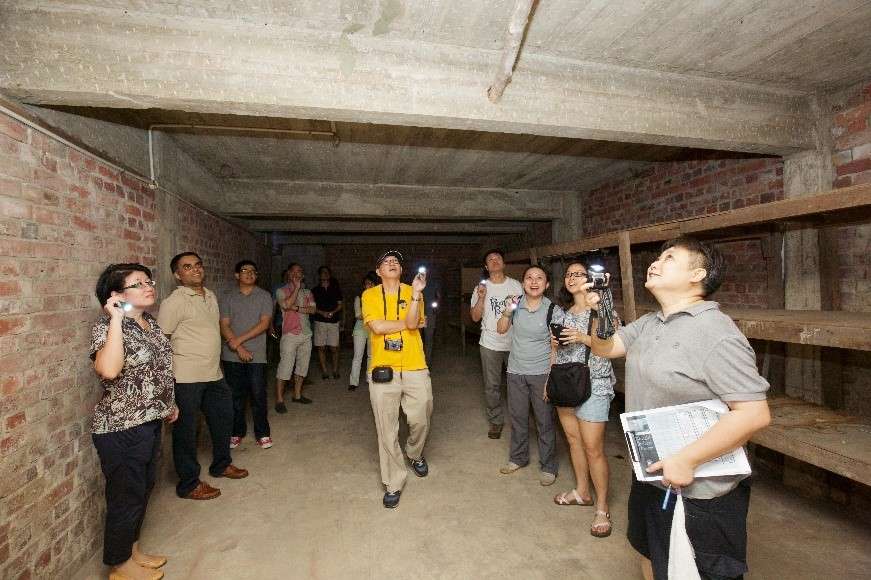 The Tiong Bahru Air Raid Shelter is not only a special heritage site in Tiong Bahru, but also an important war heritage site of Singapore. It is Singapore’s last pre-WWII civilian air raid shelter that still exists today! Constructed in 1939, the shelter has been left untouched except for minor reparations, maintaining its original architectural integrity. Built in the basement of Block 78 Guan Chuan Street, the air shelter spans 1,500m2 (equivalent to the size of 13 five-room flats) with an estimated capacity of 1,600 people. Today, it remains hidden behind the rows of coffee shops and café, right beside the carpark.

The shelter is truly one of its kind as it is the only air raid shelter that was built inside a public housing building by the Singapore Improvement Trust (the colonial predecessor of today’s Housing Development Board).

Back in those days, there were many different forms of air raid shelters on standby to be used in view of the ongoing international wars. The space underneath staircases as well as open trenches were advised to be used as air raid shelter by the government. Unsurprisingly, the people were sceptical of them, and the SIT finally decided to incorporate the Air Raid Shelter in their new public housing when the intensity of the war began to pick up, in order to give the citizens a safe place to hide in in times of actual air raids. During the period when the Japanese army repeatedly conducted air raids on Singapore, residents of Tiong Bahru would all run into the air raid shelter to hide for their lives, whenever the air raid siren wailed. Several old residents of Tiong Bahru recounted how they used to hide inside with their families as well as neighbours and friends. Despite being dark and lacking ventilation, it provided them a safe haven from the air raids that could last up to 20 minutes. Even today, drawings and scribblings can still be found on the walls of the air raid shelter.

The main reason why the Tiong Bahru Air Raid Shelter could remain in its original condition is because Tiong Bahru was not a main target for Japanese bombers in World War II. Reparations were also done immediately when there were damages due to the air raids.

Another fun fact about this amazing heritage site is that it was originally meant to be a playground when not being used as a bomb shelter, according to a 1939 press release. Before it was opened to the public in recent years, the bomb shelter was used by the Tanjong Pagar Town Council to store their spare rubbish bins.

In 2012, the Tiong Bahru Air Raid Shelter was opened to the public again for the first time. However, visitors had to register for guided tours conducted by the National Heritage Board as one of its many historical activities to commemorate the 70th Anniversary for the Battle for Singapore.

Similarly, in 2017, to commemorate of the 75th anniversary of the Fall of Singapore, the Museum Roundtable (MR) organised the Battle for Singapore (BSG) 2017. BSG 2017 featured a series of WWII-themed Guided Tours to WWII Sites & Structures located all over the island, including the Tiong Bahru Air Raid Shelter.

In mid-Jan to early-Feb 2018, Tiong Bahru Air Raid Shelter was opened to the public on a large scale, for the first time. It housed an art exhibition- RAID, which featured the works of 8 young up-and-coming local artists, who through their arts, bring about a fresh form of story-telling for this historical site. The artists hope that through their assortment of art, they can bring to life the history and heritage of the former occupants of the Tiong Bahru Air Raid Shelter. Despite its dim lighting, occasional flooding of the rooms due to groundwater seeping in, and the thick layers of dust accumulated on the walls over the years, the artists were able to use their creativity to overcome the problems, and exploited everything presented to them on site.

Today, the inside of the Tiong Bahru Air Raid Shelter is not opened for public entry, but there are a lot of informative boards about it displayed right outside! It is definitely still worth a visit to appreciate its architectural beauty as well as see for yourself how it looks like. If you want to, you can also wait till the next time it is opened to public to visit its historical interior!